Hello everyone. I have the pleasure to share with you my first games. I made them mostly in 2021 but with my job and my new born girl

,I have less time to invest but I really feel that I have some new things to share with her when she grows old, if she is interested

They are not “good” games at all but I learned a lot of things doing them (I have absolutely zero…. but really zero knowledge in coding and even my own sense of logic is very clumsy AND I am not a native english speaker, I’m sorry if I don’t use the proper words or synthax). Still, I took a lot of pleasure doing them, I scrapped pieces of codes from other games to test what’s working and what was not, (I tried to credit people/games I was using even it that was a hobby) I learned how to use Aseprite to integrate sprites, and watched tutorials from MakeCode Arcade and other amazing people. Eventually, I used instructions from Adafruit to install the MakeCode Arcade distribution in a Raspberry Pi Zero and I could mount a small homemade Arcade Cabinet in a hacked ham holder( and it works absolutely great).

So anyway, I’m planning to rework these games soon to make them, if not enjoyable, at least to some acceptable degree of playability, and doing so, your comments, remarks or suggestions are welcome

So let’s introduce the games.

The first one is called Junk Run. It’s a game about my job (I work in an association that promotes waste reduction and ecology… in UK or US maybe the equivalent would be a mix between charity shops and recycling centers). I used the Raptor Runner frame and implemented levels. 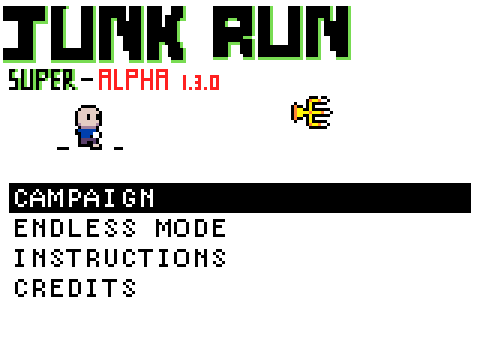 You can jump on collectibles to collect them and jump OVER waste (grey-purple items to send them back in the vehicles). There is no point jumping on the trucks except when the collect bar is full and the association truck is appearing.

Many many problems with this game : the main I have is the fact that, at the start of the levels, the ground appears empty. Something I did not get…but also it’s too big and could be improved and optimized

The second one is basically a shooter “Junk Run” version of Alien, you can’t jump but you can shoot…

Enemies are all the same, it’s boring, but It’s fun for 2 minutes to try… I wanted to try implement random behavior to sprites and try functions like switch weapons and make exploding enemies…

Problems: like Junk Run, the first phase of the level ground do not appear… plus it’s really not fun, I need a boss integration

The third one is really really not finished but I enjoyed doing it : it is inspired from an Arduboy game called Renly the Rogue that is a piece of genius in my opinion. So there I wanted to make a MakeCode Arcade of this game, using several levels, consumables, weapons and the ability to level up….

The goal is to cross a room/space with loot and enemies and escape trough the door. You can fight or not, you can loot or not, after 6 levels you will be dropped at the Inn and buy some stuff. Then you can join other levels with tougher challenges and become richer. 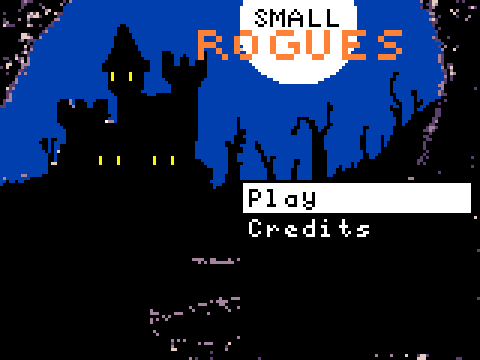 Again, these games are only prototypes, unfinished and clumsy but hey, one got to start somewhere XD
Anyway, let me know if you try it. Thank you to Microsoft MakeCode Arcade team, you rock.
Tons of love from France ! (Nobody’s perfect

I really like all three of these games; I can hardly believe these are your FIRST games because they’re so good! I especially loved the alien shooter one. The animations and character creations were all really nice. AMAZING job!

Thank you for your kind answer. That is very encouraging.They are my first games indeed but of course I made several tries/versions before reaching some acceptable degree of playability (you can tell by the names of the files

).
Usually, I kind of build the “architecure” (gameplay, levels, functions and movements) and I try to make the game work using just geometrical forms as sprites. Then I draw or copy or modify sprites and integrate them… and then… I start to add things in a chaotic way like (heeeey I want to be able to switch weapons and and and a menu and an infinity mode…) and eventualy the game start to break up, I forget half my variables and the game size in too much

What I really wanted with the Alien Game was to make enemies explode. It’s a bit laggy but cool.
Anyway, thank you again, I’ll be pleased to check your games

The Alien Shooter has such good animations! That was really fun! Hope to see some updates to it in the future!

I need these skills.

Hey ! Thank you very much. I think I wrote it in the credits but I took the animated sprites from Dishtron and Grafxkid for the humans (just redraw USMC style,recolored with the makecode arcade palette and added gun) as for the xenomorphs I used the one from Cl.Wolfstar from openxcom project (again, redraw, recolored and picked side action only) and for the small xeno walking like dogs I think it was a sprite sheet from coleovision or Atari version of the game Alien. The background and “exploding” effect I did myself as well as gun fires.
I will definitely post a refined version when I got a little time. It is very encouraging to read your comments. Also, drawing backgrounds and effects is a thing I really enjoy so if you need help for something or ideas let me know. Also if you have ideas, suggestions or whatever comes to your mind for this game do not hesitate to tell me. Like many people I kind of learn to use this platform alone so it’s a always a pleasure to have some feedback.

same goes for PrinceDaBezt123 of course !

These are absolutely amazing games, I really enjoyed them, and the alien shooter game was definitely not boring! It was extremely fun. I look forward to seeing your future posts MonkeyMan. I definitely spent more than an hour just messing around with your games.

I learned mostly from tutorials made by the community, this forum and also the guides from Adafruit for sprites integration. It helped me a lot. I am glad if you like these games. But of course it takes time and several tries to make something that works and I have never been able to “finish” totally an game. That’s my future challenge

That’s very nice of you ! In order to make the Alien game more complete, it would require maybe some extra enemies type (the easy way would be just different colors and health point, the harder would be some boss integration) and also some kind of cutscenes with story/ending messages. If you feel like adding stuff to it do not hesitate

As you may have noticed, all the three games are full of bugs.