I think we can all agree we want a 3d game… And a rather easy one is Doom! With the 3D map and the help of @kwx and @charliegregg we can make this possible! I just want to see everyone working together making an awesome game!

Together I am sure we can do this! it should not be too hard!
Thanks!

VOTE HERE! Something is wrong with the upper one! (Sorry)

VOTE WHAT YOU DO!

I think we can all agree we want a 3d game… And a rather easy one is Doom!

Personally I’m not all that interested in working on a first person shooter, and I feel that a Doom clone with lots of gore wouldn’t be a great fit for Arcade. I may be a bit of a dinosaur here, but when it was released it was considered quite controversial and it got an 18+ age rating in Germany due to its unprecedented level of violence. I guess people got more jaded since then…

From a technical point of view, there’s the question of what kind of 3D engine to use. The most basic is walls-only raycasting similar to Wolfenstein 3D, and that’s what’s implemented in @mmoskal’s raycasting demo.

The next step up is a fancier raycasting method with textured and multilevel floors/ceilings, i.e. Doom/Duke Nukem/Dark Forces style. I’m not aware of anyone having implemented that on Arcade hardware, and I suspect that it wouldn’t run well without adding some low-level functions to do perspective corrected texture lookup or similar.

Alternatively, you can use a full 3D renderer that isn’t restricted to vertical walls, that’s what Quake and most modern games use. I implemented a simple one for Space Rocks 3D, but that has rather severe performance constraints on Arcade hardware. Performance drops rapidly when there are lots of polygons onscreen, and also when they cover a large fraction of the screen. Typical indoor FPS scenes cover the entire screen with polygons and often have overdraw with overlapping geometry, and that would likely drop the framerate to single digits with my current 3D renderer. Also, it can’t currently draw textured polygons, and adding that would likely slow it down further.

I’d still be interested in working on a space shooter along the lines of Elite or Starfox. I’ve started initial experiments for Space Rocks Revenge, including some new math code to support AI-controlled spaceships and added color, but haven’t touched it in the last two months. Here’s a snapshot: 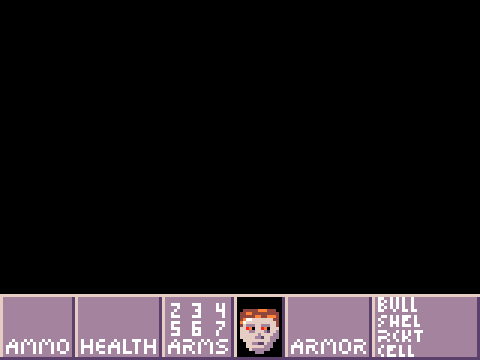 I made the overlay (No functionality lust the image!)
Thanks everyone!

Yes! I love your game! I meant something like Doom! Like the game mechanic! It does not have to bee bloody and stuff! Maybe you are a Zoo guy and animals got out their rooms! Sou you have to shoot them with a sleep ray thing and put them back in their cage! (For example) Or the enemies just Poof! away!

i can do art and maybe some code.
Note that im probs not gonna do much code because i know next to nothing about 3d games.

Maybe we can make it like laser tag or paintball.

Hey,i can do some art for the game. And also i have been playing the raycasting demo too!

is the project still being worked on? I have an idea for the overlay changing and stuff.