This is a followup to my earlier 3D graphics test, now playable with added lasers and explosions.

Use the A button to shoot rocks, and try not to crash into them. The rocks are standing still in the first wave, but start moving in later waves. Your ship automatically flies forward.

There’s a 3D radar at the bottom of the screen that shows where the rocks are in relation to your ship.

Choose your preferred control scheme with the B button. Joystick up/down is the pitch (nose up/down) control, the other functions are selectable:

The last two are mainly intended for use on hardware with an accelerometer, for example the PyGamer. It’s a bit clunky to use them with the emulator.

SO ADDICTING!!! Only that nothing happens if you crash into them…

You should lose a life and hear a sound effect when crashing into a rock, but you need to be very close for that to happen. We’re you having near misses, or is it not working right?

It was not working at all. I went right through it…

It worked for me, I lost a heart.

Great game BTW! Wish my brain was big enough to make something like this…

Was this on a higher wave with fast asteroids? It checks for collisions once per frame, but I think it’s possible for that to miss a collision if the ship and rock are moving towards each other fast enough, especially if the framerate is low which increases the step size. I have a step limiter, but that may not be enough.

I guess I need to dig up equations for 3D line-to-line distance to do this properly. That would also help to implement a proximity alert…

same… it worked for me

This is awesome! I was really hoping we would get a starfox game at some point and this is most the way there.

Wow! Perf is pretty good on meowbit too. Nice work.

Can you make the asteroids tie fighters plz?

also, I made a dashboard,

Apparently when you pass a level and hold a, it takes it up. This is level 612: 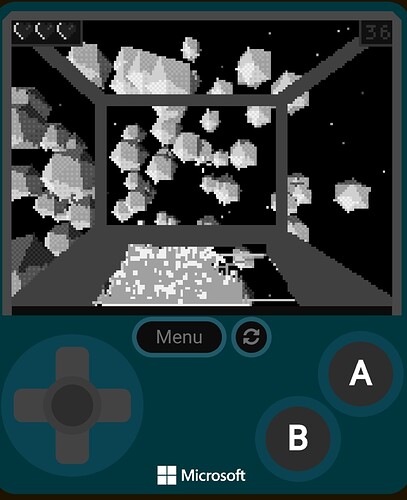 Oops, I thought I had fixed that glitch. I guess I may as well keep it as an easter egg for people who find the default progression not challenging enough

Can you make the asteroids tie fighters plz?

That would actually take some more tweaks to the renderer since TIE fighters aren’t convex. It would internally need to split the ship into several parts and draw them in the correct order to ensure that you don’t get glitches such as the central ball being drawn in front of the side panels.

I would like to add moving enemies that shoot back at some point, but no promises.

This is actually one of the most brainiest games that I actually enjoy! SUPER addictive and as @richard said, there might be a nice Starfox remake!

Who should make the game??? (Pssssst, it should be me)

you can use this for star fox

wait, are you using my dashboard?!

Wow, this is great!
Works well on the Meowbit till level 4 where it gets quite slow. Crashes at level 5.
But still amazing that it works on Hardware at all