Anyone have an idea of how to map songs in rhythm games?

Im trying to make a song for my rhythm game, Rhythm Rave: 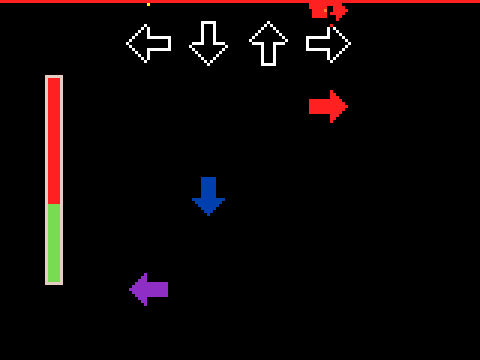 but I have no idea on how to make maps, the only thing I could think of would be a tilemap or arrays, but I really haven’t learned arrays, I’ve been learning in javascript.

I dont really know either. sorry.
Your game could turn into something great!

You could try to make it into an array with the order of arrows, but maybe i can come up with something better a little later, give me a second i’m busy now, but i can try to make that

Hello! I don’t use Javascript for Makecode, but I think I may be able to help in making a song/syncing to the notes within the game. What I did with my rhythm game is I had the song all laid out to start. Based on how many bpm the notes for the song were, I would have an on game update every () ms block. More bpm, quicker the game updates would be. What the game update was for was it would change a variable by 1, and that was what I would use for when notes would spawn in. It worked pretty well for syncing the inputs ingame to the song. I know I am not very good at explaining things, so if you want to see the actual code for what I did, here is the link to my game: https://makecode.com/_LCL0ipYbwbvJ
Hope this helped!

The “On game update ()” statement is fixed, meaning that it never change after you introduce the first value.

This would be the best approach.

I am so confused rn lol

Well, using a tilemap and scrolling down the control arrows would be way more efficient

Note that tilemaps are limited to 255x255 tiles.

Well, you can always reset and swap it out for another to continue. But i think 255 tiles is just enough considering 1 row = 4 notes max. Meaning if you want to put 1 in every row, that’s already 255 notes. I think there is no need for more but what I just said about swapping still counts if more mapping is needed.

When you mean map songs is it to display the notes cuz i know how to do that. (I created a rhythm game but it was deleted before I could publish it)

yes that, I need it and also the friday night funkin community need it for their huge game.

ik im like super late but that is an effective way to do this, but it’s so time consuming since you have to write a giant line of code (or a bunch of blocks) to get this to work.