Can someone make me a version of the Roblox game doors on arcade?

Could you explain what you mean with Roblox game doors?

Alright, listen. i think what you are asking, is impossible to do in makecode.
or just ask @kwx.

Like on roblox there’s a game called doors you can search it up.

I guess it’s not literally impossible, but I think it’s very impractical if you want something that looks and plays in a similar way. MakeCode Arcade isn’t designed to do 3D graphics, and the few attempts to do so tend to be very limited (i.e. just basic raycasting, a small number of objects that don’t cover too much of the screen, and/or slow framerates), and it involves writing a bunch of code that can be quite tedious to work on.

Anyway, “a few stages nothing much” seems to be seriously downplaying the amount of work you’re expecting someone else to put into this… Maybe think about making a 2D top-down version inspired by the Roblox game instead?

A while ago I tried making one with raycasted walls, but it didn’t turn out too well. I stopped the development before the seek chase, so it isn’t much. So far I’ve got key rooms, dark rooms, closets, and rush.

Again, this is totally unfinished and a bit buggy, it was my 2nd project I ever made here on Makecode Arcade, so it is not very good

Also, my friend is working on a top-down 2d version of Roblox Doors. Things are coming along pretty good… 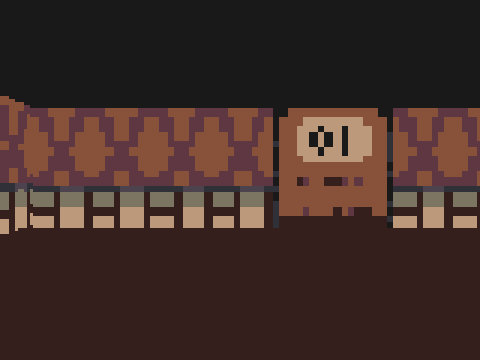 A huge coincidence, but I made a Doors ripoff a while ago, but I quit because I couldn’t transition from the raycasting camera to the Rush jumpscare.