This is a remake of one of my favorite VIC-20 games. My son and I enjoyed working together on this one.

Cyclon is a space-themed reflex game. The object of the game is to survive as long as possible by defending your star base from enemy star cruisers and deadly satellites. The game has many levels of difficulty, and the player begins at level 0.

The player’s star base is located at the center of the screen and enemies firing light missiles will approach from all sides. The star base is armed with lasers that can be fired in all four directions, as well as a limited amount of anti-matter bombs which destroy all on-screen enemies. Shields can also be activated to intercept enemy shots. Firing lasers and using shields will use up energy, and if the player’s energy runs out, their star base will explode. If the player does not destroy enemies or intercept their shots, their missiles will inflict damage to the player’s star base. Shields will be rendered unusable on any part of the base that is hit by an enemy. The star base will be vaporized if the enemy shots penetrate the reactor at the base’s core.

The player starts the game with two bases and will earn an additional one each time a level is completed. Additionally, any extra energy remaining at the end of each round will be converted to extra points. Missed shots and using your shields will diminish your energy. When all of the player’s star bases have been lost, the game is over.

Arrow keys or direction pad to shoot.
[B] button or X to use corner shields.

Plays well on the PyGamer.

It looks like this version is not able to be downloaded to my PyGamer. I would appreciate any testers to see if you can load this version onto your hardware. Thanks!

Hmmmm…even though the game is only a “measly” 680 KB when downloaded it doesn’t work for me!

(On reset, it just keeps waiting for USB and never goes into the game)

Thanks for testing! Same thing is happening to my upload as well. I do have an older saved version that works on the PyGamer. There isn’t much of a difference in game play. In the latest version above, I made additional changes to be as true to the original gameplay as possible: starting at level 0, two lives, and with enemy count at 10. I’ll post the hardware “friendly” version soon. 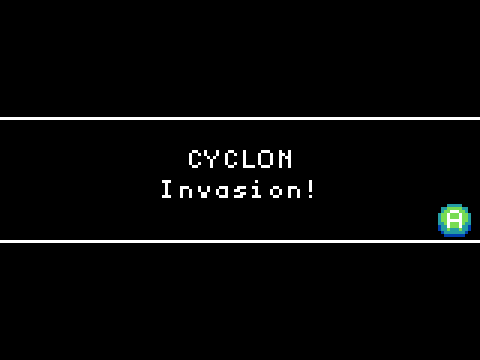 Here is the older hardware “friendly” version. As mentioned before, there isn’t much of a difference in game play from the latest version.

Try it out on your hardware. After level 20 gameplay get a little tough.