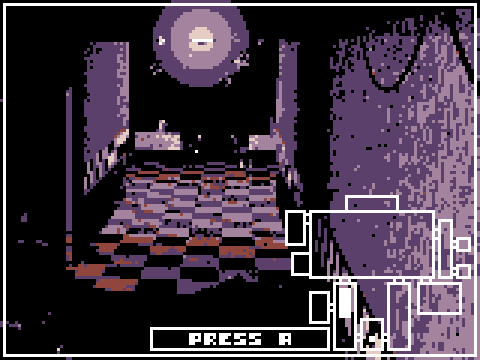 Here’s an update to the FNaF Makecode Arcade project, now the camera system is in place for you to view the building!

When using the camera, simply use the arrow keys to move around the map.

Now for the more technical stuff. Once again this was made using the Convert Image to Makecode sprite tool, however some edit had to be made to the original images, otherwise they would look like this:

Which may not look too bad, however for many of the other images, such as Pirate’s Cove, the original darkness of the image can become problematic.

Here are a few more examples, such as Freddy in the East Hall Corner and Bonnie Backstage:

And maybe it does look scarier, but there is a difference between dark being scary, and being so dark you can’t see anything at all.

Now in the West Hall, there is a flickering light, and I tried my best to recreate it, however I could not get it to work without messing up the other cameras (If you left before the light flickered, the image would switch to the West Hall with the light on, even if you weren’t on that camera.

I’m sure I could figure it out eventually, but for now I’m just going to leave it with the light on.

I’m pretty proud on how I made the map work, especially considering Makecode doesn’t have a mouse extension or any substitute for a mouse, and I tried to make navigating it as easy as possible, however if there are any problems or annoyances with navigating the map, please let me know, and I will try to make some tweaks to it.

For the Backstage and West Hall Corner Cams, I did add the easter egg images from the original game, with a hopefully higher chance of showing up.

And one last thing. I wonder, can you find every animatronic?

This is really impressive considering the makecode has no way to use the mouse as an object in the game.

It looks very interesting! I used to play FNAF and was so engrossed in the lore. That was the first franchise I “mastered” the lore of. Then I went on to Star Wars, Zelda, Halo, Metroid, etc. But I digress. Don’t give up!

this is insane how in the world did you do this