How to make a SHUMP screen scroll correctly

Here is a demo of a vertical SHMUP style game: 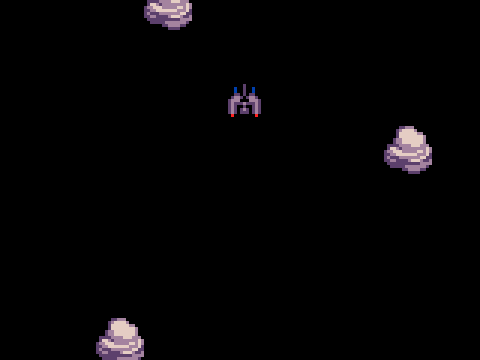 I’m trying to get the screen and the ship to move upward like they do in a traditional vertical SHMUP.

I want the screen to scroll upward uninterrupted, and I want the ship to move up with the screen while still being able to freely move around the screen.

How do I get the ship to move with the screen? Right now the ship stutters when it moves, and when the ship goes to the left and right it drifts down to the bottom of the screen.

Hi maybe this might help! Arcade Advanced Stream #65 - get back on the road

We did this stream where it’s constantly scrolling by adjusting the camera’s y position. The car can move left/right freely, but not forward/backwards. The tilemap was also designed to be overlappable:

If you click on the + symbol on the move sprite with buttons block, you can set it to only move left or right, or only up and down at different speeds:

Also since the buttons block isn’t controlling the vy now, you can just set the vy velocity once and it will keep moving up:

Also the stuttering I believe is a bug within Arcade…

Thanks! I’ll check this out.

Thanks for the tip! I’ll try this.