Following up on my son’s wishes to show, test and play eachother’s multiplayer MakeCode Arcade games with friends and family that are not in the same room, I have tried without major success to find some good solutions for connecting two(or more) people to play games in the web simulator over the internet.

I therefore start this topic in the hope of gathering in one place the knowledge that already exists and in time will be discovered in the community about online multiplayer MakeCode Arcade.*

(*For the sake of my son’s and everybody else’s online safety, and true to the spirit of this forum, I am not seeking any solutions here with totally open and uncontrolled public servers or online play, but rather secure peer-to-peer connections with a known counterpart, or some safe and controlled online community like this forum(like maybe some kind of integration with the XBox network etc.).)

What I have found and tested so far:

(**By the way, @jwunderl: Are there any query strings or “magic” flags for the https://microsoft.github.io/arcade-mp/ webpage/server, that allows for loading an iFrame with a chosen game directly via an URL, like you can do with the #pub: in the MakeCode Editor, instead of always starting with the “Secure the river game” at https://aka.ms/jowunder-multiplayer?id=32777-59846-95775-11055&nofooter=1?)

There are of course many other game streaming options like Steam Link, Rainway etc. which I have not tested, and I am wondering if the Libretro/RetroArch Netplay solution maybe could work for native executables, since I have some vague memories from some years ago, when testing an emulator(C64?) which was neither “serialized or deterministic”, that it had some backup-solution that streamed button presses and game frames that accomplished peer-to-peer Netplay connections(not on any servers, but that is also the whole premise of this post not to prefer, anyways…)

Hoping to read here about some other and better working or easier/better integrated solutions for online multiplayer MakeCode Arcade games!

That arcade-mp demo was just using peer.js and mirroring over the screen / sending button events to and from the one who started the game, which is… not ideal for many types of games as we saw. As you saw in pxt-common-packages we’re still investigating some ways in which it could be implemented in a nicer way.

The reason it was stuck on an old version was because I had forked a lot of the code to get the multiplayer working in the few days I had for the hackathon, which is why I have it living at that aka link with an upload target. In fact, most of the code that was merged recently with e.g. the pxt-common-packages changes related to multiplayer was directly taken from the branches I made for that build and cleaned up a bit to get it into a state that it could be merged, so it’s likely we could get that cleaned up to just run off beta pretty quickly – I’m busy for the next week or so with ‘real work’ but I’ll try to find some time to get that hackathon site slightly updated so we can have something to play around with. (If you want to make any games in particular, I’d note that aka.ms link just goes to a custom build of arcade I made – so if you go to the link and run the ---run at the end it will bring you to the arcade homepage of that forked version. It looks like I had based it off arcade version 1.1.3 which is old but not unusable I guess (although there will be a few bugs you wouldn’t see in the real version, e.g. because of that hack I made for sending buttons it always has a second sim running

Thanks for your quick and informative answer!

As you saw in pxt-common-packages we’re still investigating some ways in which it could be implemented in a nicer way.

I did not want to spoil your joy of presenting the great news of your recent online multiplayer efforts, so hesitated to mention it here until it was intuitively functioning and “official”. But now that the “cat is out of the box”, I hereby and relevant to this topic provide also a link to the recent multiplayer merge that you are here mentioning:

Adds support for online multiplayer messaging. Changes in this PR: * Added a ne…w simulator component `MultiplayerState`, which is enabled when the `mp=client|server` URL parameter is passed to the simulator iframe. When enabled, the component will operate in one of two states according to the value of `mp`: * `client`: The component will post keyboard events to the parent frame. * `server`: The component will post the current screen to the parent frame every 50ms. To launch the simulator in **server** mode: - `https://arcade.makecode.com/--run?id=${gameId}&mp=server` To launch to simulator in **client** mode: - `https://arcade.makecode.com/--run?code=${encodeURIComponent("multiplayer.init()")}&mp=client` Associated PRs: https://github.com/microsoft/pxt/pull/8806 https://github.com/microsoft/pxt-arcade-sim/pull/55

… it’s likely we could get that cleaned up to just run off beta pretty quickly…I’ll try to find some time to get that hackathon site slightly updated so we can have something to play around with.

If I understand you correctly, the best of two world is maybe to have something similar to the hackathon site(or integrated into the beta simulator player) to play around and test the master/beta branch of the new official online multiplayer functionality and its development going forward?

Same here, that maybe query strings to load games directly in multiplayer mode or a multiplayer ready beta simulator player, could be an idea going forward?
(Just thinking about saving efforts and resources from having many different snapshot systems not following the main pipeline. But you know best yourselves how to rationalize; the community is probably just happy having it working somehow with their newest creations.)

Coming from an office Citrix/RDP background with choppy video and sound, I was just blown away by the technology and suddenly being able to stream an play games in 1080p(today 4K) near real-time(for me not a professional gamer and not as quick reactions as the youth, 10-20ms latency is real-time), immediate reactions to controller movements and streaming real graphic intensive games on the mobile on the go or at a mountain cabin, only needing one central powerful gaming rig server and weak and cheap RPis, Apple TVs and old laptops/Chromebooks elsewhere etc. -Even an old PS3 is casually playable going first into a capture card on the same gaming server, or streaming XBox One or GeForce Now to it, and then game streaming this further to the same devices and on the go(50-70ms)!.. -Almost as fun and impressive as MakeCode Arcade!

Anyways, and on that note, it might be worth mentioning:

Looking forward to seeing what more is coming in the near future! Keep up the great work!

Yeah, I meant since my forked code pretty much got merged in as is with only small tweaks there’s no reason for the hackathon site to be based off that super old version besides just that it takes a bit of time to update it.

Ah, I just meant adding to the arcademp github pages site something like an optional ?id={sharecode} that starts with that game instead of a the fishing like game, similar to if you had pressed the plus button

Both sound great, and looking forward to it!

Imagine how cool it would be with a cross-platform MakeCode Arcade app with multiple(any) games and that would also support local AND online multiplayer and with controller support!!!

Ah, that’s unrelated to multiplayer experiences / that was made for making experiences like the kiosks we had at iste easier

in particular to play along with https://arcade.makecode.com/hardware/shoebox-controller and make it so eventually we could have it just like ‘follow these instructions to make a simple cabinet controller, then load this up in the browser to make a custom kiosk’. A little bit more to go to complete that goal though

Check out the multiplayer milestone to follow the amazing progress the great @MakeCode team is making for online multiplayer MakeCode Arcade!!!:

And will already the next mini game jam the first Monday in November be for multiplayer games?:

Christmas is coming early this year!!!

@jwunderl: …I’ll try to find some time to get that hackathon site slightly updated so we can have something to play around with.

Did you, by the way, @jwunderl, manage to find some time to update a site, maybe with a query string for a default game, like you mentioned earlier, where we already today could start making and testing multiplayer creations?

I didn’t find time to update that site, but that’s because I’m working on getting the new one running

. You actually have very good timing posting this as we just updated the production backend to make this testable the other day. I’ll list out a few caveats here to start with:

In addition, in https://arcade.makecode.com/beta, at the end of the share dialog I added a ‘host multiplayer session button’ – you can see that it is currently very ugly (red icon on far right) so the color and icon will change soon (I picked a color at random with the thought that I needed something that would force us to actually pick a good one prior to release) but it works:

(one more thing to note, there is some lag when you join / host a session while the game is compiling where you can’t click buttons – should just be 2-3 seconds. I’m planning on moving compilation over to a webworker like in the main app so this doesn’t happen but I’m finishing up some other features first

Yes cool but it is very laggy

Hi Joey!
Any news about multiplayer is excited.

This multiplayer works only via internet?
Is there any solution for nearfield, side by side ? E.g. via wire/radio

This work is pretty computer / sim centric – it’s currently much closer to just making it so you can have a similar experience over the internet to what you would get by connecting four controllers locally, with no extra logic required in the code for syncing / etc. We plan to add more features in the future, but that’s pretty much the limit for our initial release.

In this case, it is done by broadcasting the screen image - which would almost certainly run into throughput issues when applied on physical devices. I’d have to describe this one as tangential to hardware multiplayer experiences for now.

@Lucas_M sorry to hear it’s laggy for you

we’re still working on it / still haven’t scaled out the backend completely so it’s possible it will ‘fix itself’, but I’m curious about how much lag you are seeing if you can share

This is COOL!!!
I like this extension a lot!
I actually have an idea for a game

I have a couple of ideas for the future of online multiplayer in Arcade!

I made A Kiwi’s Space Adventure into split-screen multiplayer that supports online multiplayer! 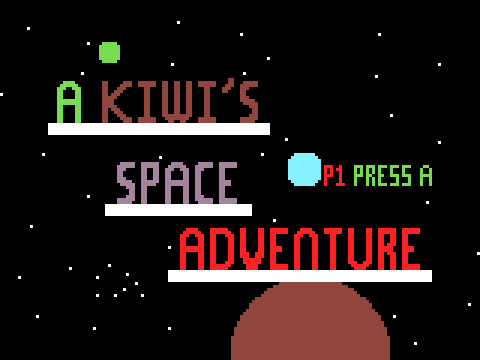 I may host a game of this while on the Arcade livestream (via a code on the chat), so that’ll be fun!

A lot of the lag when away on my side but there is lag on player 2s side.