I want to make a game like minecraft in 2d for makecode. Anybody want to help?

There already are simlar games, i can link you some later

You could make it in 3D, with heavy optimization.

That would be very helpful!

Yeah, that would be extremely hard to pull off though.

Not possible. Due to the hardware limitations, coding anything in 3d except for moving around is too heavy to handle.

Well I think it could be possible, speed would be the biggest constraint but MakeCode is actually really fast.
My mode 7 project for example, loops through every pixel of the screen doing 22 operations for each of the 19200 pixels, and yet runs at 50 FPS (constrained by the simulator).
Doing some maths we get 21.120.000 instructions per second, 21 MIPS.
By comparison the PS1/PSX calculated 66.000.000 instructions per second, 66 MIPS, only 3 times faster.

Well, I guess that counts then, but it would still be hard to code, don’t you think?

Yeah, it would, but basically you just need to do some trig to rotate a few points in 3D, sort them by distance, divide x and y by z to get 2D screen coordinates, done. 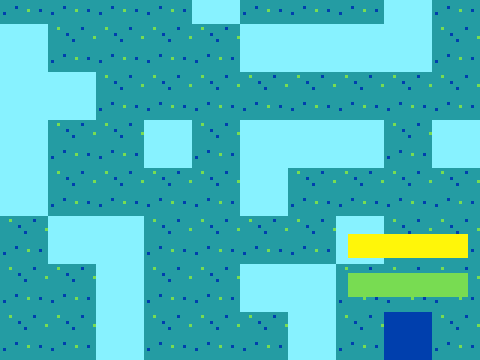 Free with Procedural Generation (random land generation), Health Regeneration,
and poisonous water (it damages your energy, then your health)