Made using blocks, with a few custom blocks to facilitate maze operations. It is built on an easy-to-use level framework.

Works well in beta simulator and PyGamer, 021 error (out of memory) on Lvl 3 using Meowbit.

Currently there are infinite lives, although this may change in the future. This is not yet a finished game, and we are looking for feedback.

I made a quick pass at a clone of the iconic game this past spring, but put it away because I was having some challenges with navigating the main character. You’ve given me some ideas, and I may have to come back to this one later this year.

The main character is 14 pixels rather than the full size 16 to workaround the bug/phenomena mentioned in Maze tile map navigation issues. Is that the issue you encountered? The good news is it’s being worked on.

There’s also some undesirable wall collisions for the enemies so we’ve had to destroy them when that occurs as a workaround for now.

The Meowbit is a bit of a puzzle as well as a challenge with the d-pad. Level 2 works on it but the very similar level 3 gives the dreaded 021. I don’t know if that’s an issue with us not cleaning up objects or some sort of fragmentation / lack of contiguous space issue. I’d be interested in any optimisation techniques for the white dot sprites as they don’t need most of the normal sprite functionality.

I did a prototype which got mostly discarded that had “can i see the player” functionality in pure blocks. That was implemented by firing black pixels as fast projectiles continuously in four directions and sensing collisions - I was proud of that hack!

Sprites are around 100 bytes each (there is over 20 fields on them it seems). Not sure how many you have. We sometimes do have fragmentation issues…

I was planning on making something quite like this a while ago, and wondered why no one else had made anything like it. The one problem I had was being able to glitch into walls while in a corner. I gave up with no way to fix it, and was glad to see that someone actually did it! It’s a good game, and I hope to see many more awesome games in the future!

I was chatting with Miles on Friday and he’s got some other things he should be getting on with now. I’ve added some animations and a few extras: Chomper (launches in beta beta).

Works well on PyGamer but on Meowbit my player died on level 2 and that triggered a 021. I’ll do some code inspection and experimenting next week to see if I can work out how to trim back memory usage for the 96kB devices. Each white dot is a sprite which is going to be part of the problem. I’ve already thinned those out a bit.

Some more additions. This runs in the beta beta simulator but for some reason it cannot be downloaded, it gives a compile error in 0.14.5: Chomper (launches in beta beta).

I also can’t open up the built/output.txt to find out why, Chrome just ignores my clicks!

I tried something similar a while back, I called my version “HackMan” hence the 1’s and 0’s

Could you start a forum for post hackman? It would be great on the community page too!

HackMan looks like an interesting twist on this style of game.

Congratulations, your game is on the community page!

The version of the game I posted before works ok in 0.14.9 now: Chomper.

I’m just playing it on a freshly minted Kitronik ARCADE.

Chomper made it onto Kitronik’s Artwork at BETT 2020, here it is with the real thing underneath: 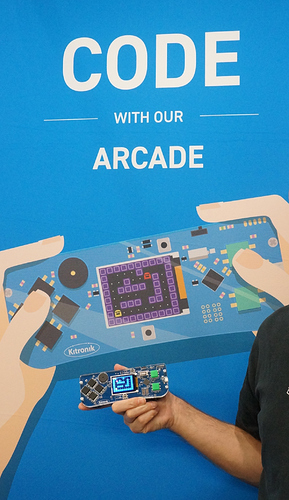 Hello! This is Dmitry, from TinkerGen STEM Education. Our company made a retro gaming console for use with Makecode Arcade, called GameGo . We have also developed a series of free online courses to help our users to get started with GameGo and learn how to make their own video games. Despite the courses are written for GameGo, there is no restriction on use with other hardware or purely in Makecode simulator.
In the course, there is a recommendation section, where we recommend some good games for students to help them learn. We want to include Chomper - a game, that you made, in recommendation section. We think it is very suitable as Demo Game for GameGo, because it fully demonstrates the characteristics of Arcade.

We hope to obtain your permission to allow us to recommend your game in the course, and use Chomper, as a Demo Game in GameGo. In addition, we will send you a free GameGo for you to use and create even more wonderful games. Please reach me at maslovdmitry@chaihuo.org for further communication!
@mileswatson

Sorry for the slow reply! Feel free to use the project however you want in your course (the code is MIT licensed).