How To Get Those

? You should just be able to find them in the tile selector? 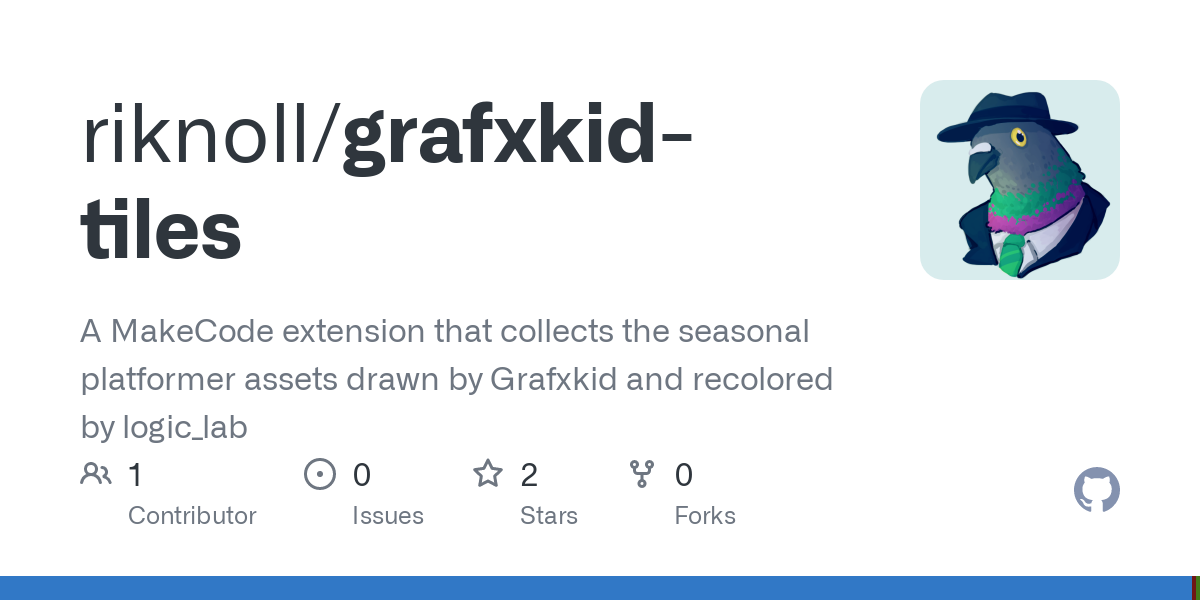 GitHub - riknoll/grafxkid-tiles: A MakeCode extension that collects the...

Well, it is an extention and I also used it before and in fact it is in the forum

How to Test the link before editing it

That was so funny if the newer tiles are extension

It gives me an idea, I am creating Arcade Forces Speed Battle (

Wait whaaat? How did you mask that death animation into the frame? I need to know

So I first define some variables:

Then in a game update loop: 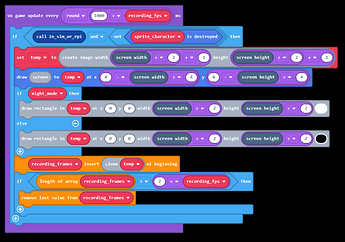 image1072×752 90.9 KB
Every round(1000 / recording_fps) (which works out to be 33ms) it will make a temporary image that is half the screen size (plus one for border) and draw the screen to somewhere past the very top left, so that the center ends up being in the actual image. Then it draws the border and inserts it to the list of the last 2 seconds, which is the list recording_frames. Then if the length of the recording is over (2 * recording_fps) (which works out to be 60 frames) then it removes the oldest frame so there are always 2 seconds in memory.

When you lose, it first splits up the recording into the first second and second second. I have no idea why I did that lol.

Then creates the sprite that will play back the last two seconds.

Then it makes the “RIP” text: (which is just a text sprite) 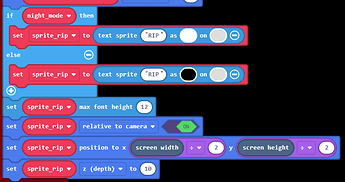 Then it plays the melody, the recording, and then the actual game over: 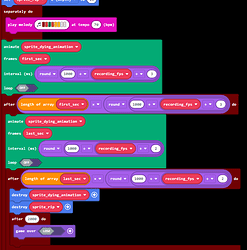 Now that is big brain

Thanks for sharing! this game is really cool. I’ve been fiddling with the code for a bit and got the new version to run on my pygamer by removing the death animation, as well as experimenting by adding 4 frames of coyote time to the game as I found sometimes it felt like the player would fall off a ledge even after pressing jump. My modifications can be found here if anyones interested in taking a look (I’m most comfortable in javascript so I converted the project before modifying, sorry if that makes it unreadable to some). Once again, thanks for sharing! this game is an awesome time killer when I’m in need of something to do.

I got a seed with a sandy texture, you really put the work in for this game! also, 56.something or other I don’t remember is my high score. My trick is that you can run across one block gaps without jumping and virtually every other gap that has a down angle. 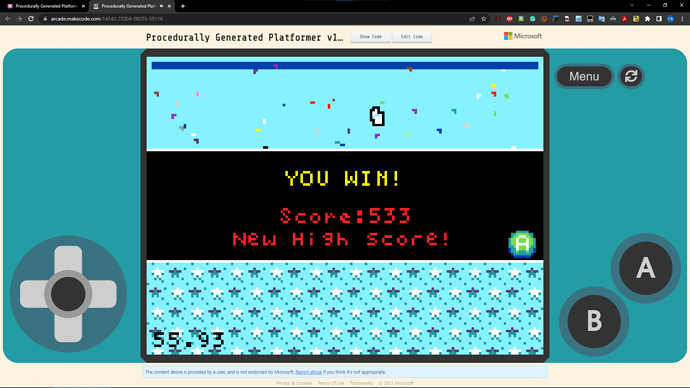 this awesome, this is the second-best game I’ve seen in this forum, BTW i am new here

A young sprite roaming around in the cold nights around the mountains, trying to find his way, and then a death cam appears.
That, is what I call an amazing and funny game. (It’s awesome.)

This game is so fun! It’s one of those games you can just keep playing and playing for hours. I’m really impressed that you were to make a procedurally-generated platformer on Makecode. All that is beyond me.