Recently I finished the demo for Tie-Dye Beat Em Up Redo! Starring Tie-Dye! It was a lot of work, but now I can finally release it! 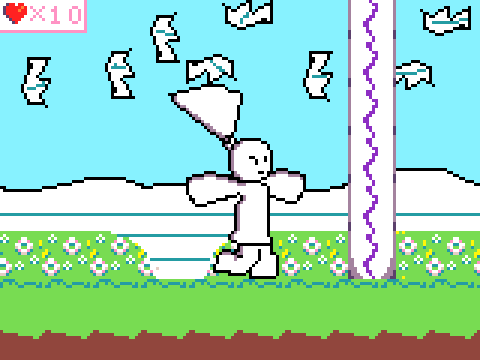 -You win after defeating the boss, which spawns at 100 score.

-If you start a throw of a newspaper and then immediately jump after (there’s like a 3/10ths of a second window to do it) then you can throw newspapers in midair.

Fire: Shoots a wave of fire that goes through enemies. Slow moving, but does double damage to the boss

Earth: While standing still, brings up a pillar that kills enemies that touch it. While moving, tosses two rocks. Both of these attacks do double damage to the boss.

Plant:Projectile moves pretty fast. After hitting four enemies with it, heals you by one heart. This effect does not work on the boss.

There will be 10 more maps, each with their own unique design (hopefully) Please give me feedback so I can improve the game. Stay tuned for another update sometime… or maybe I’ll just sink into the floor.

u gonna make more enemies, I like the design

Yep! I am working on the next level.

Alright, so this game is on hold simply for three reasons: because I am burnt out with making it, there are a lot of bugs, and the code is getting hard to handle. I am making another Tie-Dye game in the mean time. When I first came up with Tie Dye, it was made up with platforming in mind. Now, that can become a realization! 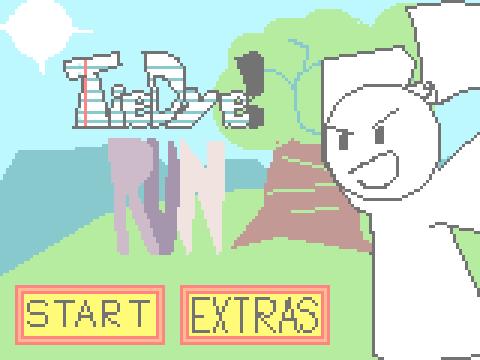 So here’s a little sneak peak!

It’s great! However, I can’t download it into my hardware. It says that the code has errors.

It does? well I didn’t find any when playing the game before release. I’ll look out for more bugs.

So I added a new Tie Dye Power called the Ice Tie Dye. It freezes enemies and turns them into ice blocks. Let me know if it is fun to use! I also noticed that Tie-Dye is really big, so I made him 25% smaller. This probably won’t be permanent, so let me know if I should make him any bigger or smaller to improve gameplay. Have fun! 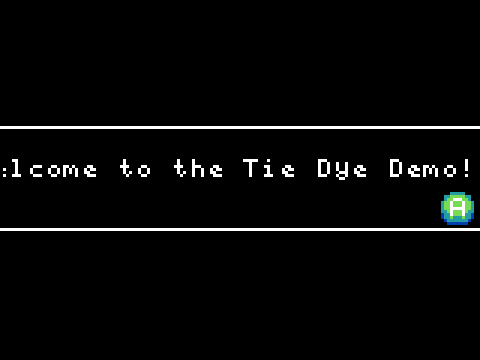 when i say not to the demo, it chrashes

not to do what?

Which code is the spike thingi of the orange power up I may need it for a project?