I started out trying to make a simple game to show kids how to use MakeCode Arcade, but then I couldn’t help adding a few fun features. Please let me know what I could do to improve it, gameplay-wise and code-clarity-wise. I am trying to keep the blocks simple enough for beginners to examine, but may have missed that boat already by using arrays and data sprites.

POST EDIT:
Here’s a newer version incorporating feedback from Richard, as discussed in comments below.

This is amazing!!! I’ll admit I was a little perplexed as to why my submarine was changing shape but it ended up being such a cool mechanic

Thanks for the feedback, Richard!

The idea was that you would study each fish, and learn something from each one that would let you catch one shark. So studying the turtle would teach you to harden the hull of your sub, and studying the green fish would teach you to use camouflage, and so on. I have the dialog boxes pop up, but they are on the long side, and players may just click through. Let me know if you think of a better way to convey the premise.
Thanks again!
Jeff

Maybe the submarine could say something like “this specimen gives me an idea…” when you change shape. Might make the relationship between collecting species and morphing the submarine a little more explicit.

I love the dialog boxes too, so don’t get rid of those!

Yes, that’s an excellent idea. I tried something more verbose, but it was hard to read the “say” with the sub moving, so I shortened the “say” text to a one word summary of the mimicry, such as “Spines!”, “Pinchers!”, etc. and left the dialog at the end to summarize the use of the mimicry to catch the shark. Here is the game now, subtly changed, but hopefully improved:

This is super cute! Absolutely love the concept, and the game is nicely implemented, too! Well done!

I like how you collect animals and change the design

I SCREAMED when I got the spines from the pufferfish I was so excited. The colors were so nice together too

Exxxxcellent! I’m happy to hear you were drawn in, emotionally. It’s tricky trying to balance the right amount of difficulty. I tried to craft things so that it would be easy to jump in and get some animals and sub modifications, but then have another layer of strategy required (getting the faster animals first) to win the game. Thanks for testing!
Jeff

Amazing work, @Dreadmask197 !! It ain’t easy, avoiding the sharks and avoiding wasting immunities. Thanks so much for posting, too. It’s nice to see it enjoyed.

With a full win under your belt, let me know if you think of any further improvements I might make. I was thinking of making the levels/speeds more visually distinct, and maybe also increasing the difficulty (even though I rarely win) or having adjustable difficulty, with fun navy ranks to play as: seaman, first mate, captain, etc.

Levels and maybe different animals or maybe even playing as a shark or a competitive play against your friends? I love your game with the sea animals so maybe the land animals should get a chance or bugs?
@FlyingFox Your games are nicely done.

They are just suggestions. Different animals and biomes can be done.

The museum finally published the video that got me started making this game. 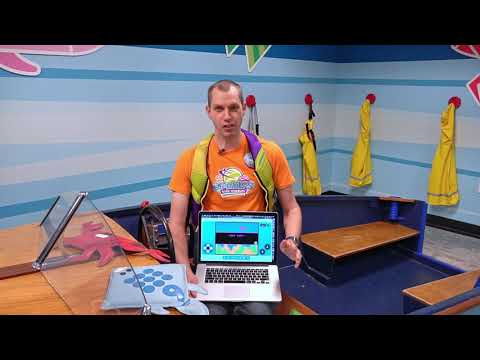 I originally started out trying to make the simplest possible game to be able to show kids in five minutes. Arcade is so engaging, though, that I got sucked down the rabbit hole and couldn’t stop adding features to my version, which the editor of the video only briefly used

The important thing is that I had fun, right? And the video will probably inspire a few kids, too boot

Is that museum in Portland, Maine?

Nevermind! Thats the one in Raleigh. A children´s museum in Portland looks very similar!

I’ve heard the Portland one is super cool, too. I think that’s the one that has some tech exhibits I’ve seen pictures of.

It is quite cool. There is a fishing boat play area/exhibit that looked like the one in the video you shared. Thats why I thought it was the one in Portland.