I used one of the Skill map tutorials and made it into a boss rush.
This game is still not done, I need to add more bosses.
The game currently will have 10 bosses.
You guys can post ideas for more bosses.
I will probably ask for some help.

Boss Rush beta will have only 3 bosses, so you guys can come up with ideas for the fourth boss. Remember, the game will have 10 bosses. After that, we can make even more bosses!

Hey @Lucas_M How can I Make my Wrapped Wrept Shoot a projectile? I want it to shoot bandages 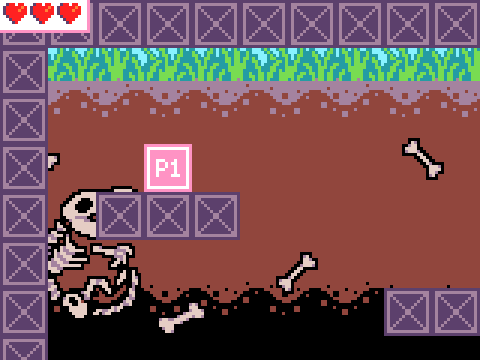 First beta out!
Bosses:
The lost miner: does absolutely nothing
The crepty Clown: At 50% hp, he will go very creepy and very fast
The Wrapped Wrept: at 50 Hp, he turns into a revenant. He shoots bandages

How am I supposed to do that with out the game code??

I post the code @Lucas_M , give me some time

Here is the code for the Wrapped Wrept, if so you can change my code to make it shoot a projectile 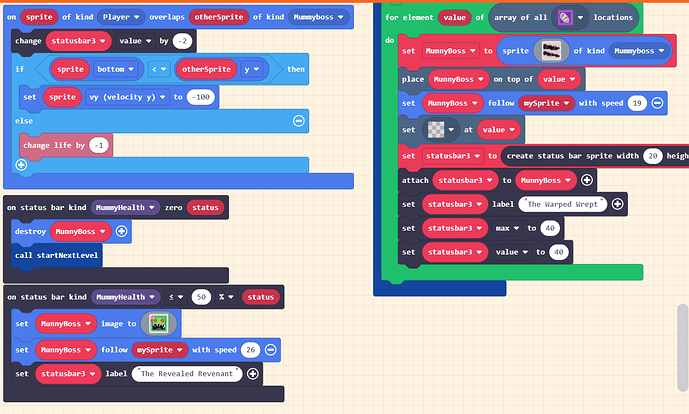 have you tried using a projectile block??? it’s in the sprites column…

I used that, but it doesn’t spawn

Well, the logic you’re using doesn’t allow it to work. If I tried using a projectile block in your code I don’t think it would work.

Oh my marioninja430,
This game does not make sense but it is very good! I like it. Me and my friend really enjoyed it! Can you make a game for two players on two separate kitronik arcades please!!! I would really appreciate it.

Block Boss Rush 0.2 Update is out! 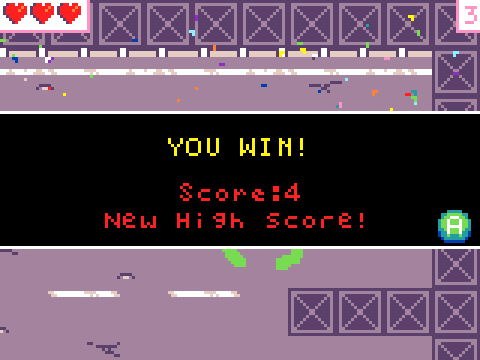 Features:
Multiplayer! can have up to 4 people to go against bosses
Bosses:
The lost miner: does absolutely nothing
The Crepty Clown: At 50% hp, he will go very creepy and very fast
The Wrapped Wrept: at 50% Hp, he turns into a revenant. He shoots bandages(shoots brains in revenant phase)
NEW! The Shoe of Atrocity: Shoots farts that are homing, and becomes a living gas at 50% hp(Credit to @XDlol for the idea)
Upcoming For beta 0.3: Bosses 5 & 6, High Score!
Need ideas for bosses 5 & 6
you guys can come up with the ideas!

Here’s a tip on how to defeat the shoe of atrocity,
go to the top platform, if the shoe ghosts through it, keep circling around him until he doesn’t ghost through the wall.

Avoid all of his homing farts, and keep killing him!

Very satisfactory to jump on their heads

Cone of Evilness: Throws stop signs, creates mini cones that follow you, shoots a bunch of missiles from the hole at the top.
At 50% hp, it starts chasing you and you need to throw the mini cones at it to finally defeat it.

I have some code from a game I had about a year or two ago if you would like me to post it.