Cabinet with raspberry pi -- ran out of disk space

Hey guys. My students made an arcade cabinet powered by a raspberry pi zero. Everything has been going great, however we have run out of disk space.

Whenever I try to drag a uf2 over it says that it is out of space. So far we have loaded about 32MBs of my students 40ish MBs of games. This is confusing since there is a 32GB card in there.

It is also really sad because I was hoping to be able to also load all of next semester’s students on to the cabinet also. So I’d need around 100MB of space for games. Is there anything I can do?

Here is a picture of it in our hallway. The kids flock around it every class exchange. It has turned a lot of students into programmers. 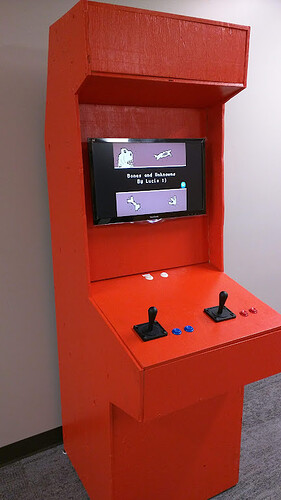 Hmmm… How are you transferring the games? Are you using a usb cable or just putting them onto the SD card?

If dragging over USB is failing, it might be easier to load them straight onto the SD card

@peli is there an easy way to get the elf file for the game?

I’ve been dragging them over using a usb cable.

Not sure if this online .elf download link generator could help with anything?:
https://vegz78.github.io/McAirpos/

Though, it is not batch capable, nor does it work with UF2 files(yet)…

that might work! i wish i had a raspberry pi around to test, but i don’t have one at home. i’ll see if i can get someone to give it a shot in the office tomorrow

I did some testing and have more information to share. Here is what I did:

So kinda a work around? Maybe my SD card is just… bad? IDK.