How excited are you for the new Requiem game I'm developing? (Also, news on Requiem!)

Requiem is in no way close to finishing because I’m still working on the assets. But you do get a sneak peek of the main character.

Also, it’s now just called Requiem. I figured all the other titles and everything made it more complicated than it needed to be and also just because I was running out of ideas. I might call it Requiem Remastered, but for now, I’m just calling it Requiem. 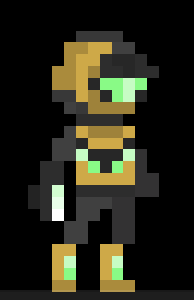 (Concept Design - Not the final. Tell me what you think!)

By the way, he’s called Note.

One of the hardest things to do in a game like this is the gun and having all the animations for the gun to go diagonally while running, jumping and everything

How do you have the people who voted shown on the poll?

When you’re making the poll, go to the advanced settings and you can set it there.

It is but enemy states will be much more difficult, especially boss fights. Don’t forget general asset-making.

This won’t be created on Makecode Arcade because Makecode’s software isn’t powerful enough to process a full 8-directional character and an entire game. I’m creating it on Godot, with a full 360 mouse-based rotation/aiming system. It’s harder than I thought it would be.

Note? I thought it was Ghost.

me too maybe its the son of Ghost

@personalnote We Need A Full Story for Requiem!!! Plus i can help you out on the new requiem game your making.

I can help with creating the story if you guys want. I like to write stories

So is this a MakeCode Arcade game? If not, then it probably shouldn’t be in the forums.

Objection! (Just literally search up any of the time game jam games, for example lol)

Yeah sorry, guys. When creating the sequels and other remakes, I ended up scrapping each storyline to “introduce it as something new”. I haven’t fully fleshed out the story yet, but It definitely borrows elements and characters from scrapped projects and the original.

But just to conclude the story of Requiem, here is an excerpt from my documentation.

I wrote this like last year and I eventually gave up on giving it an actually good story.

It’s a good story do you mind if continue the story? but as like a book, not a game

Yeah sure, I don’t mind.

This won’t be created on Makecode Arcade because Makecode’s software isn’t powerful enough to process a full 8-directional character and an entire game. I’m creating it on Godot, with a full 360 mouse-based rotation/aiming system. It’s harder than I thought it would be.

On a side note, @Lucas_M did create an 8-directional system in his demo of Requiem, which I think is a great way to create it without wasting space. The system I used in Requiem: Lost Station was very crude due to no other pre-existing 8-directional system at the time. But the system was similar to @Lucas_M’s in concept.

This does allow room for a possible Makecode Arcade port or remake of my upcoming game. I’ll try to see what I can do with the demo @Lucas_M provided. Extremely happy with what he managed to do based on the text from the Requiem: Lost Station topic. Keep up the good work and I hope to see your demo turn into a full fledged game!