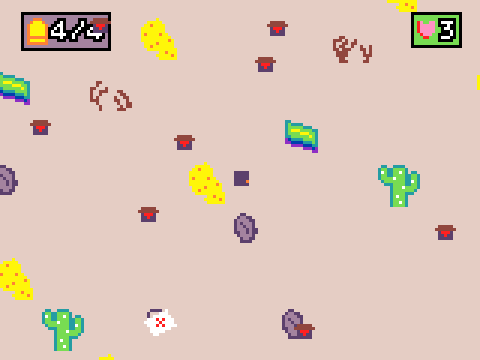 A quick game about an Arizona bandit hunter fighting through hordes of ne’er-do-wells! There’s also a lot of secret cheat codes to make playing the game zanier.
Controls:
Arrow Buttons/WASD: Move
B: Shoot
A: Reload
Player 2 A: Run

I really like the idea of this game, as well as the incredible art. It’s fun to collect the bullets to increase your max capacity. The AI for the enemies is interesting as well. My suggestion is to make the bullets move faster and give the enemies less health. I think it would be more satisfying to defeat them in one hit. Also, I wonder if you could have the enemies shoot at you, so it would be like a bullet heck shooter?!

I could absolutely add in both of these! Maybe I can make it some sort of mode select, determining enemy health and if they shoot back 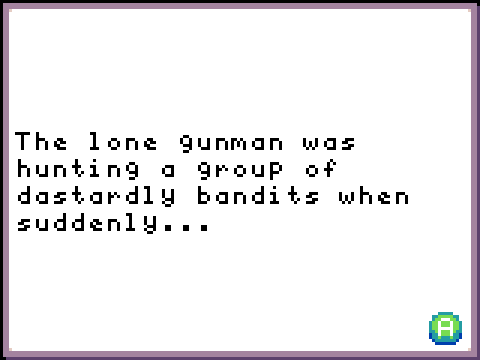 I added enemy bullets, speed up the player’s bullets, added an option to muck around with enemy health, and also added a knife finisher that instantly kills the enemy by pressing A if you’re close enough to it. I added this because the game would be impossible without it if you put in anything above 4 on the enemy HP screen, so I figure it needed it.

I beat it! Albeit with 1 health left.

Hitting the enemies is tricky! And the bandits shooting back at you makes a lot more fun and chaotic. But the faster bullets definitely helped. I like the enemy health customization, although I just set their health to 1 because I’m a wimp.

The knife is also a nice touch. My only other suggestion is to add health pickups so you don’t have to survive on 3 lives for the whole game. Also, I noticed you can pick up this paper-looking thing with an X on it. What does that do?

Ironically enough, that’s a health pickup! It’s meant to look like a diagonal first aid kit, but I’m not a great artist. I figured 1 health pickup per loop would make the game a lot more fair and beatable, but any more would make it too easy