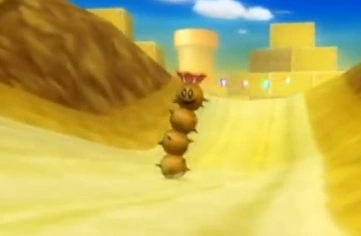 This engine currently doesn’t support it, but it is possible to do wireframe graphics (and collision, as you can see here), but it doesn’t support textures. If it did, it would have very bad performance most likely and it would be VERY hard to code, considering that it was tough to add 1 2d plane with a texture.

3D terrain would need much more complex code to render, and I suspect it would likely be too slow without low-level support. The current code only supports a single textured ground plane, and it uses simplified math to speed things up in ways that are only valid for horizontal planes.

How do you make the aesthetics like trees move? Animation?

Those are 2d sprites projected and scaled into a 3d space, not actual 3d objects. This couldn’t be used for slopes, because there is a limited amount of them and it would be hard to make a full environment with them (and it would look bad most likely.)

When is the next update?

Idk, I’ve been working on other projects, and this one is sometimes hard to release updates.

You copied my track

i added myself hopinghttps://makecode.com/_HJYMi5M0Xgy5 thats fine

already did long time ago so yea

Fantastic work guys, if we finish the game I’d bet with a few more tweaks we can make a better sonic R on inferior software

I’m not going to be dev-logging this game on this (or any thread), but I’ve made a converter that turns tilemaps into images for my game (at the expense of RAM)! (as well as stripping out the physics engine). I’m going to make this be the basis of my game, and I will custom-make the physics engine, graphics, gameplay, and more! This demo probably won’t run on hardware, but the actual game will probably use much smaller tilemaps. This allows me to make MUCH bigger maps (up to 8x bigger, 255 16x16 tiles instead of 512x512 pixels) while taking up considerably less storage (so I can ACTUALLY use a share link!. The only drawback is it will be difficult to place things precisely and do collision, although I probably can use custom tile-based collision, similar to tilemaps, but custom coded.

also WOW that was a wall of text lol

I just thought I’d post this here, because I don’t want to clutter up the game jam thread, and I might (probably still not) rework Makecode Kart in the future to use a tilemap system like this!