That’d be a reasonable compromise to supporting actual textures.

I see y’all have done some work on image manipulation lately. (I can draw circles now! Yay!) I don’t see anything equivalent to the paint bucket tool, though, in the methods for an image. Filling the walls that are actual rectangles is simple. (Just draw a rectangle that’s one pixel smaller in each direction.) What would you recommend for the trapezoids? I looked at mapRect, but I don’t think that’s quite what I need.

P.S. Do you go by Rick, Richard, or something else?

For those of you who want to play… 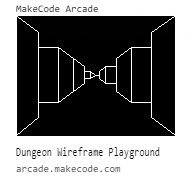 For those of you who are curious, this is nowhere near its final state. As the name implies, I’m still playing around with some basic ideas. The code is starting to shape up nicely, though.

Yeah, we don’t really have anything for shading polygons right now. As for a fill-bucket like API, there isn’t anything currently in arcade but I did implement it for the Sprite editor here:

Not sure if that is too memory intensive for the board or not, but might be a good starting point. I think there is an in-place algorithm too

Also, I go by Richard

Thanks for the link, Richard! I have shading working: 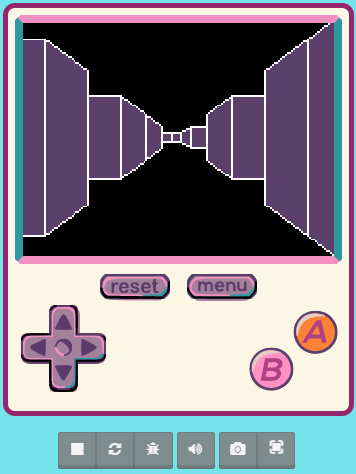 The Wikipedia link that you provided served as a great starting point. The pseudocode in that article is not well-structured. (Talk about spaghetti code; Dykstra would throw a fit!) So, I did some poking around and found this:

I basically ported that to MakeCode Arcade. It’s a bit too slow, so I’m going to have to go with something a bit faster (even if it chews up additional memory). I’ll keep playing with this, though, to find an algorithm that balances efficiency for speed. For now, though, it does the job.

You’re all welcome to play in my current sandbox! The algorithm renders the dungeon from a tile map. You can walk around the dungeon with the arrow buttons, and you can pick the colors for the wall outlines and the wall textures. If you set the wall texture to zero, then you get a wireframe rendering (without the penalty of filling the polygons). Those three constants are at the top of the main.js file. It even works on hardware!

Don’t mind the hidden game.splash calls. Most of those were there to help me diagnose a problem when running the code on hardware (which I’ve since fixed).

Nota bene: Pathways can only be one tile wide right now. If you try to have pathways that are wider, I doubt highly that it will render properly.

I found an algorithm that seems to be a good compromise between memory usage and performance.

The old code is in there, too.

You can see how I’ve been testing the different algorithms here:

There is a third algorithm there, similar to the one that @richard employs in the sprite editor. The stack gets too large to work on hardware, but switching to scanlines seems to keep us within the memory constraints of the devices.

The dungeons can now have passages in the floor and in the ceiling so that you can build additional levels in your game. The rendering is a little off, but it’ll do for now. 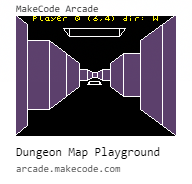 Next steps (roughly in order):

Other ideas? Feel free to share them here (as y’all have already done, and which I appreciate).

OK … need to put this away and get ready for class tonight! Cheers, all!

That’s brilliant, Joey! I love the amount of thought that has gone into MakeCode. It’s an incredible platform as a user, and I’m learning more and more how brilliant its design is as a developer. Thanks for the tip; I’ll definitely be employing those mechanisms when I get to that phase of development!

Wireframe mag did an article on a basic version of this. https://github.com/Wireframe-Magazine/Wireframe18/tree/master/source-code

Thanks for sharing, @peli! I’ll have to add that to my subscriptions list!

Totally expecting a gelatinous cube to attack me.

Alex, I think we might be the same person. One of the first things I made in the MakeCode Arcade was a wireframe 3d engine.

I love it, Chase! I’ve been meaning to pick your brain a bit on something.

I’ll be creating some sort of mechanism for users to create wireframe objects for the monsters and such. Those objects, essentially, are vector images. In a thread many moons ago, you had mentioned that you had dabbled a bit in that space.

Having a Blast with MakeCode Arcade! Arcade

When it comes to rotating sprites, it’s a quite difficult task given the resolution of the sprites. I’ve implemented an algorithm called RotSprite that rotates low resolution images in a way that is more aesthetically pleasing than traditional rotations. You can add it as an extension with the url: https://github.com/ChaseMor/pxt-arcade-rotsprite. Here is an example of this extension It’s a pretty basic implementation though. There’s definitely some optimizations that can be made. For an aste…

Did you make any headway in that area?

I didn’t necessarily make any progress on rotated sprites, but dealing with vectors is SO MUCH easier.

I recommend you look at a little game that I made a while ago. I just had to update it and document it.

I dabbled in making a vector graphics extension and this is pretty much as far as I got. Feel free to look at it and steal as much as you want from it.

Oh, and feel free to ask if you have any questions. You can ask here in the thread (or I think this platform supports messaging), or reach me on Discord.

Nice work, Chase! I appreciate you sharing it. I particularly like the ability to set an alternate center point to make rotating the sprite more flexible.

For those of you following along, vector images are the next step on the to-do list. (I’ve already crossed-off some of the other items.) I’ll probably release vector images as a separate extension in case it’s of use to anyone. After that, I’ll add diminishing visibility to the dungeon, and then wrap all of this up into a beta-version of an extension.

I’m looking forward to digging into this!

how r yall so good, i am struggling with just blocks, granted im 13, but still

@Blobiy keep pushing! We have amazing games written in blocks!

Can u look at my game that I’m having issues with, it’s called
change image not working. GLITCH?

I started programming when I was 10 years old, @Blobiy, and I remember thinking the same thing at your age (and long afterward, too!). Keep working at it! We all started somewhere, and all of us here probably started in different environments. MakeCode Arcade, though, is a wonderful place to learn programming!

If you like programming, and if you work hard at it, then you can make a career out of it. The world needs high-quality programmers … and, I think, we always will. Hang in there, and be sure to ask us for help when you get stuck!

P.S. I see that Joey replied to your other thread. If you’re still stuck, just let us know over there. If you get stuck with something else, just start a new thread. We’re all here to help!

I’m about 12 years old, and I’ve been thinking the same thing.