@livcheerful, @shakao, @jwunderl, and I started our collaborative game today on stream! The forum chose RPG, so we’re making a game about a pangolin raised by armadillos in the American southwest (obviously). We laid the groundwork for the game today and I’ll be making another post soon asking for submissions, so stay tuned!

Grab the code below:

Suggestion: right now it feels like a monster-collecting game - the tilemap is going to need to get much bigger for an RPG! (Also, what is the maximum size of a tilemap? There was this recent issue constraining it to 255x255 which is still pretty small IMO - or like when you get to the edge of one you load another one like a really big chunk)

Otherwise this is going great! Right now working on some music for this! (Hopefully it doesn’t sound trash when I actually write it down lol)

Here is some art for you! 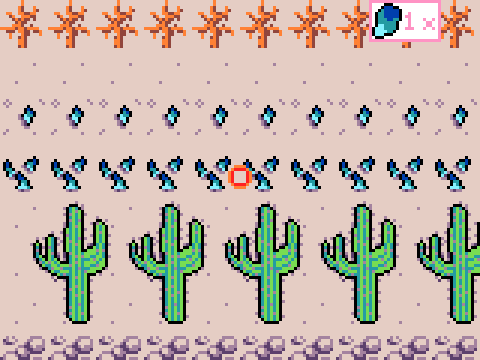 um pangolins don’t live in the desert, armadillos do

Hey! I mad my own edits. I got the idea for the easter egg because of how one of the tiles was named. To activate easter egg:
up down left right B A

Hey folks! @shakao, @jwunderl, @livcheerful and I started part 1 of our collaborative game on stream today and now we’re opening the floor for you to submit assets for us to include in the game! Anyone who submits content that we use will be included in the credits of the final game (which we should be posting some time next week). If you weren’t able to tune into the stream today, our game is about an adorable pangolin (look them up) who is being raised by a town of armadillos in the American…

Yea! But the Pangolin somehow got there and was mistaken for an Armadillo! And got raised by them!

so you did not read the story…
Basically it is a pangolin raised by armadillos.

Also, there are desert pangolins.