With reference to previous correspondence with @richard and @peli, and happy to announce that McAirpos now supports running MakeCode Arcade games natively and with controller support on Batocera retro-gaming distro in addition to RetroPie, Recalbox and the Raspberry Pi OS console and presumably other similar ARM hardware and Linux flavours, as well as a new working Ansible playbook template that allows quickly scripted installation onto several devices in parallel in e.g. a classroom, collaborative project or makerspace setting… 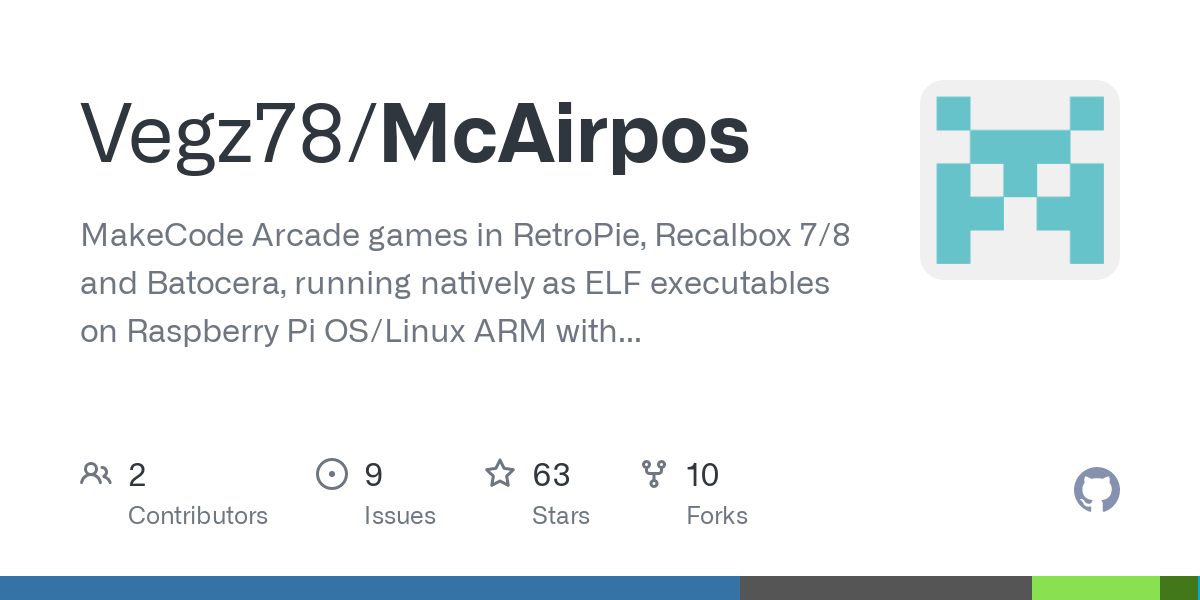 …I hereby launch this topic as all things regarding getting MakeCode Arcade(MCA) games to run freely and natively on the Raspberry Pi, at the moment probably focused on, but not meant to be exclusively about McAirpos.*

(*My hope as the developer - having gone far past my initial aim of getting my son’s MCA games to run on the big screen together with the rest of his retro games and even though it is a learning and joyful experience - is rather that the fabulous @makecode team (re-)discovers the synergy and where retro-gaming and unbounded creativity and tinkering really is the Big Thing in a great many places on Tellus, and that they unite and share in mutual love, respect and cooperation with the Raspberry Pi(RPi) community and foundation, and instead make their own solid and official solution for running MCA games natively, freely and functioning on any distro, with built-in controller support, support for both reading from and writing to the GPIOs and popular peripherals, sensors and actuators, and open to whatever the combined and larger and presumably even more creative and unified world-citizenry might hack together of fun and impressive stuff, in our common journey for world peace, unity, prosperity, education, future and technological advancement.)

The rationale for this thread are earlier fragmented and confusing contributions to the topic, where I think it might be a good idea to gather and consolidate relevant information in one place, and some themes for this topic might be:

Preferably, since moderation sometimes takes somewhere between 24 and 48 hours pr. post, support requests for particular installations should instead be posted as an issue at the GitHub repo, and I hope eventual heated discussions with numerous posts on small details could move into separate topics and not dominate or hijack this thread.

Happy retro games making and playing, looking forward to hearing from you!

This thread continues, complements, references or replaces in whole or the relevant posts included in the following topics:

While I was working with McAirpos and getting MCA games to show up in and run from the game menus in RetroPie, Recalbox and Batocera, I had the pleasure to receive both good help and support from all the retro games systems’ developer teams.

They were all interested in integrating and supporting MakeCode Arcade games in a more official fashion than my kitchen door hack approach, like for all the other emulator systems, and they all offered technical support along the way to help make it happen.

My understanding is that the major steps to accomplish such integration are:

The last point might be the one requiring the most work, as the current MCA (arm) Linux executables utilizes RAW Linux Input Subsystem events for controllers. But I have seen many references to SDL in the pxt source code, which might imply that this could be accomplished in a much more direct and better way than through all the detours I take with uinput-mapper etc. in McAirpos.

But my communication most recently has coincidentally been with the Batocera team(meaning this is freshest in their memory), and they are the only ones who really focuses big on the DIY/homebrew retro gaming scene(like MakeCode Arcade), where they include emulator entries for PyGame, TIC-80, Pico-8 etc. in their default installation ready to play from the main menu with example games, and not as optional add-ons or only showing up after having added such games. They were also the only ones who took MakeCode Arcade as far as advertising even the current working McAirpos hack support on their blog and have support people on Discord who answer within minutes on the subject: 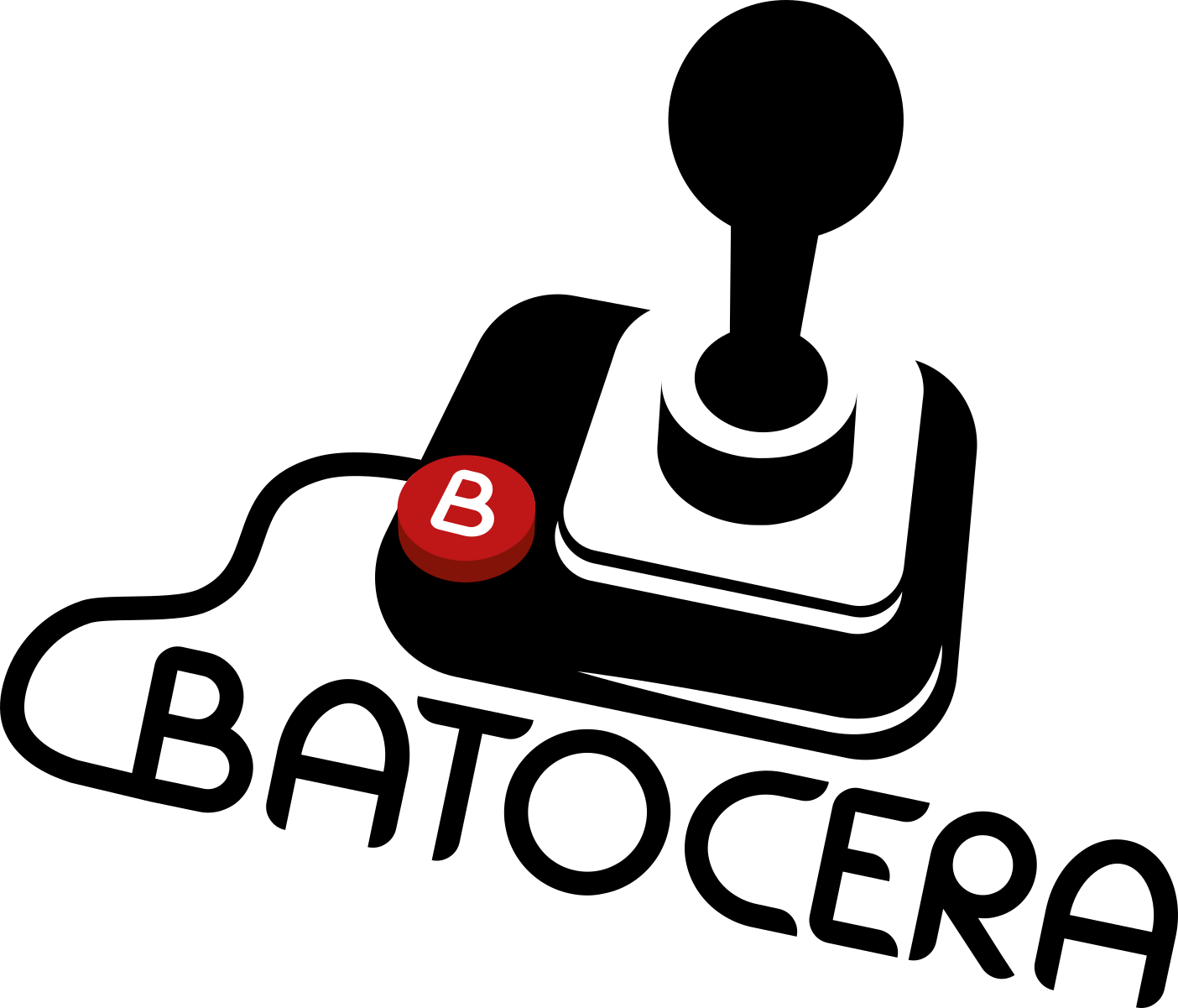 MakeCode Arcade's games have been made playable by the efforts of Vegz78.

Ceteris paribus, this might indicate that Batocera are the most eager to include MakeCode Arcade games in their official portfolio.

Though pretty big on the Raspberry as well, one downside compared to RetroPie and Recalbox, is that Batocers largest group of users seems to be on Linux and Windows x64 computers. Even though I suspect that MakeCode Arcade games already could quite easily be compiled also to x64 executables(especially Linux), I have still not found out how nor gotten any real affirmative response on the matter from the @makecode team, except a little from @eanders regarding UWP apps(with compilation of MCA x64 native executables, I imagine that bundling of MCA games with Batocera also on these platforms would be a breeze, and make the market and interest for MakeCode even bigger);

For anyone skilled enough to contribute and inclined to share, or just curious or interested enough to learn more about the pxt build system and figure out how to make MakeCode Arcade games run as (experimental and as of yet unsupported)standalone apps/native executables on Windows, Mac and Linux etc., there is an ongoing GitHub issue about this in @eanders’ explorative UWP repo here: As I understand it, this should definitely be possible, with such native and VM build targets already envision…

At the moment, I am swamped with trying to understand the pxt source code and getting McAirpos to open uf2 files directly, and I have no feeling of ownership or wish to be some kind of “syvende far i huset” for anyone who might wish to take on a project like this.

This is just a tip about 3 potential interesting learning/development projects, which definitely have both a confirmed user market/demand and teams that wants to help, and an offer to help as much as I can if it is somehow based on McAirpos(or not based on McAirpos, which probably is a better way forward in the long run). I can also convey any initiative/contact request to the people I was in touch with at Batocera, Recalbox and RetroPie, if of interest.